Friday morning about 3:00 AM, I woke up and tossed and turned for a while before I got up and sat in my office. A story that I had never really thought about was suddenly in my thoughts.  I could not shake these thoughts from my head. I wanted them to go away so that I could go back to sleep. It didn’t happen.

What were these thoughts?

I could not shake the thoughts of when I taught my daughter, Cassidy to ride her bike.

Why did this story flood my thoughts? This happened a long time ago.

I just could not stop thinking about it. I had to get some sleep because in the morning I needed to drive my sister-in law Lynn to the Cleveland Clinic.  She has been diagnosed with ovarian cancer and her journey to fight and overcome it is now in front of her.

Driving home from Cleveland it started to make sense to me.

God was telling me to apply the lessons learned from this story.

The encouragement from it is directed to our family.  The call is for us to remain positive, resilient, unified in the common cause, to help Lynn overcome that which is placed in front of her.

And while it is easy to question and wonder why all of this is happening. We will remain steadfast and persistent in the confidence that God knows what He is doing.

My hope is that this will be an encouragement to all of us and to those that may read this.

Cassidy was ecstatic – until she noticed that I’d removed her training wheels.

“David, where are the little wheels?”

“No, David; I do! I can’t ride without them. Will you please put them back?”

Much whining commenced, but in the end, she relented and got up on her bike to try. I assumed the position that every parent has found themselves in at some point.

Left hand on the handle bars, right hand under the seat – trying to run sideways as fast and as far as I could.

Which as a fat man… wasn’t very fast, nor far.

And when I couldn’t keep up, I gave her a push.

It was a beautiful sight… for about 3 seconds… and then she crashed… hard.

I coaxed her back up a few times, but it always ended as it had begun – Cassidy on the ground, scraped up, crying and working on a new bruise.

If you knew Cassidy at that time in life, she had quite the stubborn streak. When she’d had enough, she stood up, left her bike where it landed and began walking home.

“Cassidy… where are you going?”

She wasn’t trying to be dramatic. She meant it.

She didn’t see a way over the hurdle in front of her. In her mind, it was impossible for her to ride it without the crutch (those little wheels) she’d grown to expect and rely on.

So she gave up; she quit.

In that moment, my heart broke a little. The thought of her feeling incomplete or incapable in any way pierced me, even over something so small. I wanted to intervene, I wanted to force her but what could I do?

It wasn’t enough for me to believe she could do it.

She had to believe for herself.

This was her journey – and she decided she was done.

So, I picked up her bike – and walked her home.

Thankfully, that’s not how this story ends because after a few days, I talked her into trying it again. And before you credit my parenting skills of breaking the iron will that Cassidy had, I must admit, I was afraid she would give up.

Such a pivotal moment for such a young child.

Would she always back down when things that became hard and difficult?  Would she shy away in fear of failure? Would she quit when it seemed impossible?

What happened next changed my perspective on life.

Cassidy climbed up on her seat and with the best push-off I could muster, in a burst of energy and faith, she took off.

Tons of passion – not a ton of skill, so you know how that ended.

As she stood up, looking at a freshly scraped knee and then at me.  She gave me a look like only Cassidy could and I felt a chill run down my back. She was not happy.

I could almost see her standing at a crossroad.

She could retreat to where she was safe – and sad – or she could try again and move a little closer to the awesome thing waiting for her.

This moment would cut a path for her, in either direction.

I shook off her look and I ran over to her and put my face close to hers.

“Do you wanna know a secret?”

She nodded her head.

“Did you know there’s a really special trick to riding a bike that only big kids know?”

Her eyes got big and she looked at me with a puzzled look.

Slowly, like I was delivering top-secret information, I whispered,

“Are you listening good?” she nodded again in approval.

“No matter what, you can’t stop pedaling or you’ll crash. And even if you pedal really hard, if you jerk the wheel around all over the place, you’ll crash. You’ve got to keep your wheel straight, keep your head up, look forward and just keep pedaling. That’s the secret. You got it?”

“Yes” she nodded, but not quite convincing herself.

Cassidy resigned herself to give it one more try. I was nervous because if she failed again she would not ever believe me again. She would start to believe that she could not trust me.

Losing her balance, she jerked the wheel far left and right a few times, but this time, she immediately corrected and steadied herself.

Her head was held high and looking forward now, instead of down – and her courage began to swell.

She picked up speed and I whispered to myself, as if I could will her to get it right, “Come on Cassidy… steer straight and keep pedaling… don’t stop.” 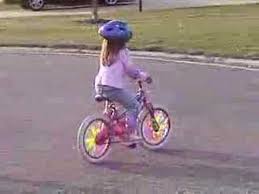 wheels turning faster and faster, moving farther away from me, I yelled out one last time… “Steer straight and keep pedaling!!”

And in that single moment, right before my eyes, I watched Cassidy step out of her past and into her future.

It’s rare that we get to see someone’s moment of breakthrough so clearly. Watching it up close was inspiring – not because she learned to ride her bike – but because she overcame her fear and the lie playing in her head that she couldn’t do it.

What had been impossible for Cassidy just a day before not only became possible – it became reality.

You most certainly will have doubts.  But know this… we are here.

With one hand on the handlebar, the other under the seat.  If you fall…  we will help you get back up.

We will hold you until God takes over.

Lean in with your head up and keep pedaling.

When you think, you can’t, when experience says it won’t work, when the pain affects your will, and when you bear the bruises and scars of previous attempts…

As a family, we will press on. We will encourage each other.

We will stay the course. We will remain #CASESTRONG.

In the valleys that are in front of Lynn, we are comforted by knowing that God will not leave her there.  Because we know that God knows what He is doing.

One thought on “Just Keep Pedaling”