I’ve been thinking a lot about when Peter, James, John, and the rest of the Twelve disciples accepted Jesus’ invitation to follow Him, they committed and dedicated themselves to patterning their lives on His.

Me? I get out of bed and I meander to church for the 11:30 service on a Sunday morning and I somehow I want to get credit for my effort.   Getting to service a somehow I have caught myself wanting to get a medal for my “commitment” and “dedication”.

Is this what it really means to follow Christ?

As I write this, I am ash 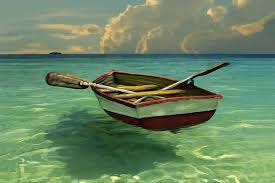 amed of ever wanting “credit” for in my walk with Christ.

I have always been amazed that these men gave up everything in this life to follow Him.  I cannot imagine that type of commitment to follow Christ.

In particular, I been drawn to the story of Peter walking on the water. Or more specifically his failure to walk on water.

But struggling to follow Jesus’ example doesn’t make them failures. On the contrary, their mistakes and missteps show us an important dimension of what it means to follow Jesus.

And I think that may be why Matthew tells the story of Peter’s attempt to walk on water.

Like Mark, Matthew shares the story of Jesus walking on water. In both Gospels, the disciples have gone ahead of Jesus in a boat. The weather gets rough. In the predawn hours the disciples spot Jesus strolling across the lak

If we stick with Mark and stop with that, the passage tells us only that Jesus is divine. That’s an important message, and Matthew conveys it as well. But then Matthew adds the bit about Peter getting out of the boat. And it’s important to ask why he included it.

Scholars have concluded that he had a source that Mark lacked. But that still doesn’t explain why Matthew decided to include the episode in the larger story he was telling. My guess is that he wanted to show us what discipleship meant in light of what we had just learned about Jesus’ identity.

Following an incarnate God means that we would be set an impossible example to most ordinary people.  Jesus is urging us to walk on water. And He knows what that will mean for us. Let’s look more closely at the passage.

Peter says to Jesus, “If that’s you, tell me to come out there with you.” Peter climbs

over the side of the boat, takes a few steps, and then he sinks. Jesus grabs him up and hauls him into the boat. He says, “Oh you of little faith. Why did you doubt?”

We have all heard lots of sermons about Peter’s faith deficit. We’ve been told that if he had only had enough faith, he would never have sunk. Frequently we’re harangued about our own puny faith and told to buck up.

For starters, remember that Peter was a disciple. He took the risk of imitating Jesus doing something impossible. It’s what he had signed up for. Besides, Peter had already come to expect Jesus to do and say unthinkable things, for example…

Turn the other cheek. Don’t imagine that violence will solve anything.

Forgive the unrepentant. Repeatedly. How you feel about it isn’t the point.

Love your enemy. Even the dangerous one who hates your guts.

Give your stuff away because someone else needs it. Don’t even ask about who deserves it.

See everybody—simply everybody—as infinitely valuable in themselves. Nobody is here to serve your agenda, gratify your desires, or live up to your expectations.

Eat with sinners. Befriend outcasts. Get over yourself.

For Jesus, this is what it means to live. This is eternal life. This is love that resembles God.

And, yes, at first it will be like walking on water. Impossible! You will sink. And that is where the growth begins. Once you’ve been brought back to the safety of the boat, will you step back out on the waves again?

When Jesus welcomed Peter out on the waves, He probably knew that Peter would sink. Who wouldn’t!

Jesus wasn’t setting a test for Peter, waiting to see if his faith measured up. At Peter’s own request, Jesus encouraged his insanely risky behavior.

When Jesus talks about Peter’s little faith, he’s not saying

“deficient faith.” Sure, Peter’s faith isn’t where it will eventually be. But neither is he utterly faithless. His faith has room to grow. Just like ours.

Faith does not grow by spiritual strain. It grows when we stretch ourselves to attempt to step out of the boat and attempt walk on water again and again.

To do those things that Jesus teaches us to do when everybody around tells us we’re naive or just plain crazy.

In truth, we grow in faith, when we get over ourselves and love our neighbor as if our own life depended on it.

So, step outside the boat… sure you’re going to get wet, but it is in that commitment, dedication and desire to become like Christ that makes all the difference in the world.

I believe our life depends on it.

One thought on “Step Outside of the Boat”