Much of the world blinked uncomprehendingly when the Nobel Committee first announced the winner of the 2016 prize for literature. Bob Dylan.

Yes, that Bob Dylan. The folk singer. The rock star.

The counter-culture hippie poet with a marginal singing voice. In some circles that stunned silence morphed into contempt and even outrage.

The prestige of the Nobel Prize for Literature would be forever diminished. 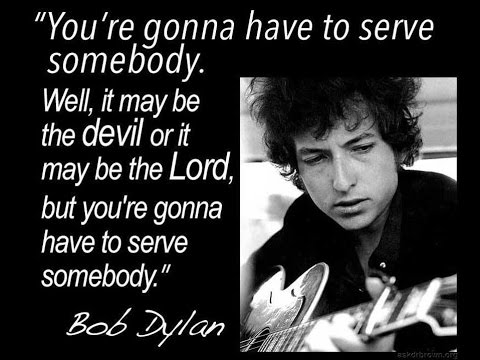 ylan’s Nobel honor put a smile on my face. I’m a Dylan fan. Especially early Dylan. “Like a Rolling Stone” and “The Times They Are a-Changin’” appealed to me when I was younger.

In 1979, Dylan started a three-year period as a born-again Evangelical Christian. He produced one hit called “Gotta Serve Somebody.”

You may be a businessman or some high degree thief,

But you’re gonna have to serve somebody

You may be a construction worker working on a home,

But you’re gonna have to serve somebody.

Jesus’s teachings inspired these lyrics. But they could just as easily have come from the Hebrew Scriptures with which the young Jewish boy Robert Zimmerman—now Bob Dylan—would have been familiar.

In his farewell speech to the tribes of Israel, Moses’s successor Joshua said this:

“Now if you are unwilling to serve the Lord, choose this day whom you will serve, whether the gods your ancestors served in the region beyond the River or the gods of the Amorites in whose land you are living.” (Joshua 24:15)

To put it simply, you’re gonna have to serve somebody. Our actions embody a deep commitment, a devotion, to something or to someone. Whether we realize it or not, whether we name it this way or not, something or someone becomes our god.

By “god” here I’m referring to whatever it is that individuals and communities believe will give their lives meaning. Whatever will make their lives matter, make their lives significant. Even if we make no conscious decision on the matter, our habits and actions—the patterns of our lives—betray what god we are worshipping.

Some people chase celebrity. Others pursue wealth or power or social status or just more stuff. They may neglect their families or their health or their integrity to get applause or to exercise control or to accumulate possessions.

We can so devote ourselves to power, prestige, and possessions that they function as our gods. The pursuit  of them shapes how we act, the relationships we form, the values we inhabit, how we think about ourselves, and how we treat other people. The Bible refers to small “g” gods as idols.

But here’s the catch. We’re gonna have to serve somebody, but we can end up serving somebody who isn’t worth serving. These small “g” gods offer what they

cannot deliver. They offer to satisfy our deepest longings. Those longings are for the infinite and the eternal.

We don’t want our lives to matter for a mere fifteen minutes and then be forgotten in the fog of history. We want our loves and our losses, our struggles and our victories to have meant something—to mean something—forever.

Applause fades. You can’t take your stock portfolio with you beyond the grave. Every athletic record gets broken. Every president, world champion, and Nobel prize winner is replaced by the next one.

There is only one capital “G” God who delivers on the promise to make life infinitely and eternally significant. The God who made us in order to love us. The God who loves us so that we can share that love with one another. To serve this God is to commit ourselves to loving what that God loves how that God loves it. And that God loves the entire creation.

At the dedication of the first Temple, King Solomon said as much.

“O Lord, God of Israel, there is no God like you in heaven above or on earth beneath, keeping covenant and steadfast love for your servants who walk before you with all their heart.” (1Kings 8:23).

We’re all gonna serve somebody.

The patterns of our lives will reveal who or what that is.

We are all going to have choose who we are going to serve.