Many people use it in vain.

I am not perfect by any means, I’ve used all of these terms. Probably more than I would like to admit, even to myself. As I have grown older, I try to avoid using the name “God” in any form in my daily conversations.

Most times, I can only whisper “Oh, God” in grief, regret or horror.

I could only softly whisper “Oh, God” when I watched the horror of something that I see on TV or hear about. Among many other examples, I whispered it when I witnessed 9/11. The same when I heard of the shootings at the Marjory Stoneman Douglas High School, the Vegas concert massacre and the Living Tree Synagogue reached me.  I softly whispered them again, when former students of mine died so young to addiction, or when I lost close friends to cancer.  I said it when one of my closest friends died by their own hand.

I’ve whispered these words far too many times in my life.

Lately, I’ve been wondering what people mean when they say, “God.”

Actually, I’ve been increasingly concerned about who people think God is.

The source of my concern is not the growing religious pluralism of America. Neither do I spend time worrying about how to think about God in order to get into heaven or to stay out of hell.

Instead, I’m convinced that what we will make of our lives together on this planet will be guided by our idea of God. Not all ideas about god are a good reflection of what or who God really is.

If you can do whatever you want and live any life that you choose then I am not sure that you have a good idea of who God really is.

Scripture’s long and winding testimony makes it clear that we humans can make a wreck of things when we harbor a distorted and even toxic idea of God.

All of us have inherited a fractured world. We face broken hearts and disease, poverty and racism, hunger and greed, vicious governments and deadly addictions, garden variety personal sins and genocidal violence.

This is the world you and I inhabit.

What we are going to do about it will depend on our idea of God.

For some people “God” is a supernatural being. For others a higher power. It could be money, power, fame, or their substance of choice.

History and the daily news are littered with individuals and tribes of people and nations coping with the world’s chaos by finding somebody to blame. A scapegoat to vote off the island, to lock up, to lock out, to crucify.

Whether these people believe in a supernatural being or not, they’re adopting strategies remarkably similar to those who seek to enlist or at least to appease an angry, blaming, punishing god. Their “god” is wrathful, and they need to do whatever it takes to stay on its right side, including throwing somebody else under the bus.

Jesus came to show us that God isn’t like this.

When we follow Jesus’s example, we are leaning into our true selves as the image of God. Jesus put it this way: “If any want to become my followers, let them deny themselves and take up their cross daily and follow me.” (Luke 9:23)

Jesus healed the sick, ate with outcasts, and fed the hungry. He taught us to forgive, to give the shirt off our back, to love even our enemies. This is the image of God on planet Earth. And that image comes especially clear in the cross. There we see simultaneously God’s relentless love and the cost of that love. God suffers with the world to heal the world.

Jesus died on the cross. He was a threat. A threat to the Roman Empire’s view of God.

The Romans executed him. Jesus knew it was coming.

That’s what Empires do. They eliminate threats.

And nothing could be more threatening to a militaristic, status-craving, power-driven, possession-obsessed Empire than someone who says that God blesses the poor and the meek. The weak and humble. Jesus resisted the might of Empire with the compassionate reign of God.

Yes, the Romans killed him for it. But they couldn’t really take life away from him. He had already been giving his life away.

He had been giving his life away for the sake of the world from the moment of his birth. His life was the perfect embodiment of healing love. The perfect image of God. Even and especially in his dying, Jesus showed us who God is. Who we most truly are. That’s what the Bible means when it says that God created us in God’s image.

I hope that my life, when it is over, in its best moments at least, says that God is love and points them to Jesus Christ. 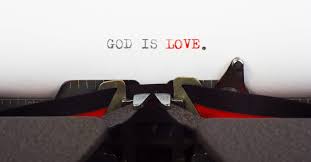